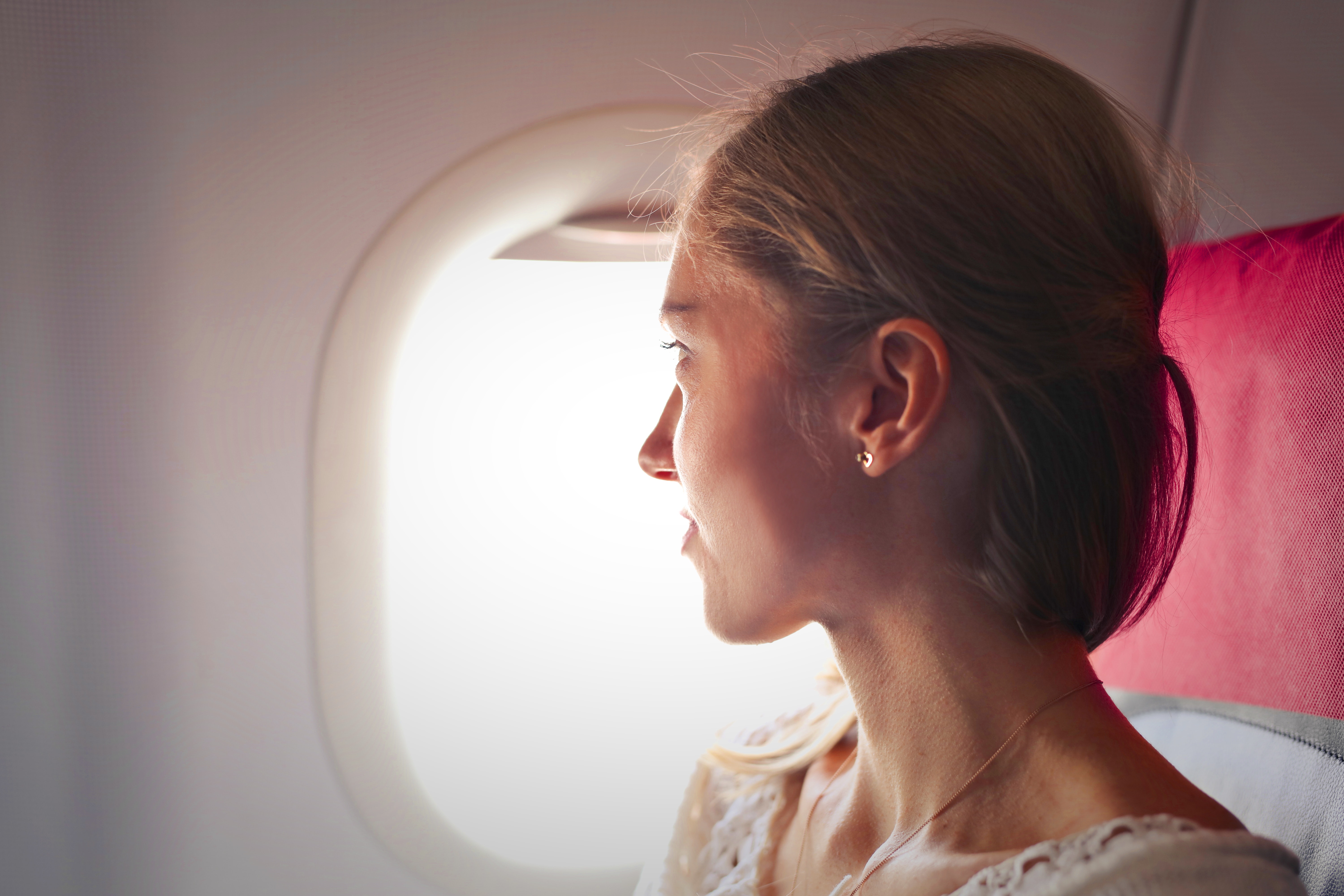 User research uncovered that certain air travelers have the desire and resources to customize a flight to their liking. Those users are often brand loyal, demand clear pricing and want a stress-free experience. With those users in mind, a goal was created: design an easy-to-use flight booking website that focuses on flight customization and clear pricing throughout the booking process.

Three people that had flown at least once within the past year were selected for interviews. They were asked to talk about their experiences booking tickets online, and their overall needs and wants when flying. 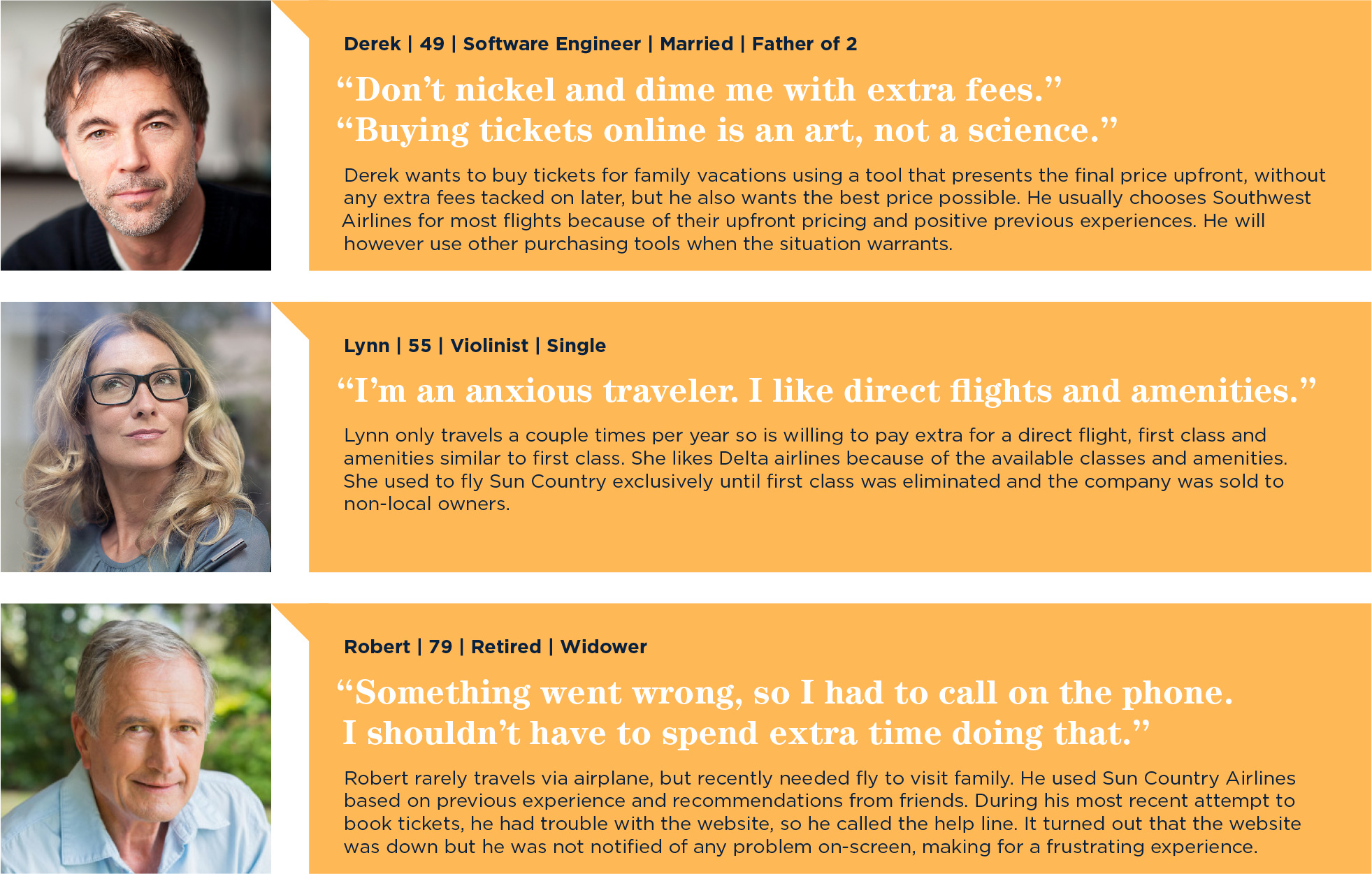 These interviews revealed some common themes among users:

Some design opportunities were revealed:

Finally, a user goal was developed:

My user is an older adult who is brand loyal and has the resources to customize a flight to their liking. My user demands clear pricing and a stress-free experience.

With the user goal in mind, a website prototype was designed that focused on placing flight customization options a step before listing flight results, simplifiying the selection process for those travelers that demand amenities on their flight. The design also attempted to feature clear, on-screen pricing at all times. The design process took place in three three phases:

Interactive Prototype
Medium: Axure – MacOS App
Notes: Color was removed from the prototype, urging users to focus on process usability and not aesthetics.

The interactive website prototype developed in Axure was tested by four users recruited to roughly match the demographic identified during the user research phase. The overall concept and process flow to purchase plane tickets was tested. The testing focused on the first 4 steps of the process since these are key to the website’s goal of easy flight customization and price clarity.

All users were able to successfully book plane tickets by following a provided user scenario. The dynamic price updating feature was completely missed by all users. Users identified many other confusing UI elements. The homepage banner graphic was not effective communicating the website’s use goal.

Findings deemed most critical to the user goal of booking tickets are listed first. For the purposes of the case study, users will simply be labeled A, B, C and D. 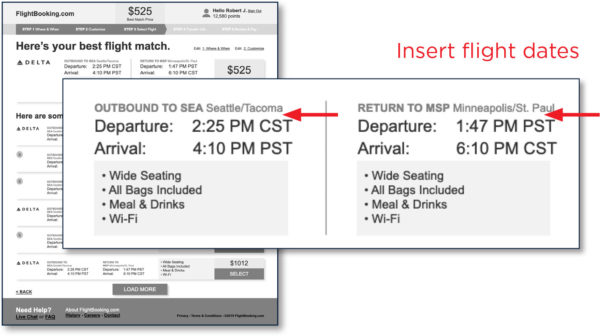 Flight Dates Not Shown on Results Page: User is unsure if they are booking the correct flight.
USERS REPORTING: D
RECOMMENDED REMEDY: List the flight date on all recommended flights, and/or show the dates at the top of the page. 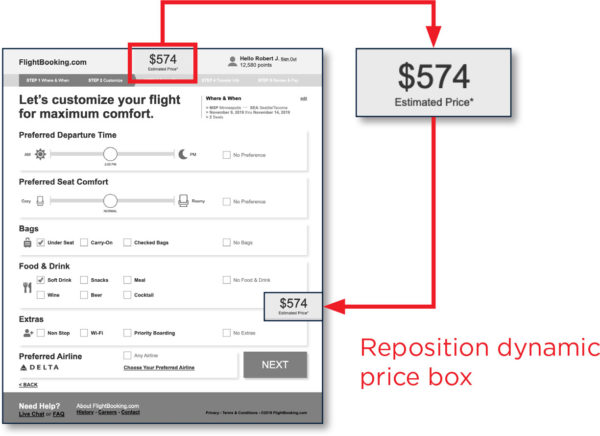 Dynamic Pricing Box Not Noticed by All Users: The dynamic pricing box at the top of the screen would change when the user changes flight customization controls. This box was not seen by any test user; confirmed by questioning users after test completion.
USERS REPORTING: A B C D
RECOMMENDED REMEDY: Reposition the dynamic pricing box so it is more noticeable and stays on screen when scrolling. 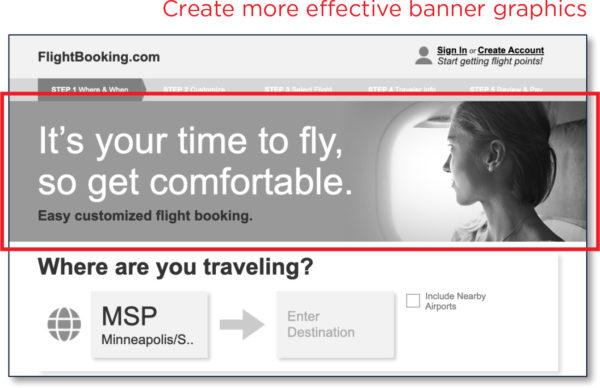 Banner Graphic on Home Page Not Effective in Communicating Website’s Purpose: The header graphic on the homepage was either ignored or misconstrued by all users. User A thought the phrase “so get comfortable” meant the booking process would take a long time to complete. User C ignored the banner because he’s “been conditioned to ignore website ads”.
USERS REPORTING: A B C D
RECOMMENDED REMEDY: Redesign banner. Reevaluate with users. 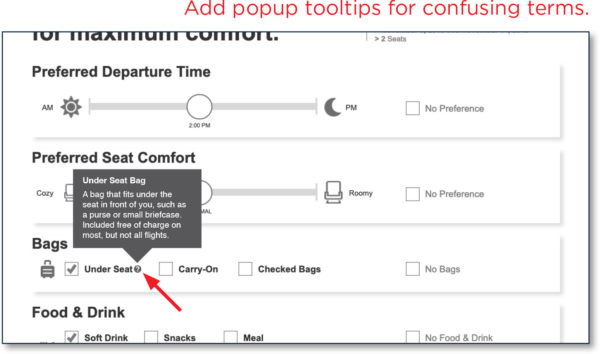 Industry Terms Not Understood by Users: Some terms were not understood, particularly by those who do not fly often. All users reported at least one point of confusion. Terms reported: three-letter airport codes, nearby airports, under seat bags, seat size “cozy”, redress number, known traveler number, contact information form.
USERS REPORTING: A B C D
RECOMMENDED REMEDY: Add popup mouseover tooltips indicated by a question mark icon where needed.

Eight other interface design issues were uncovered during testing. For brevity, those items are not included in this case study.